Uh-oh, this doesn’t look good.  Whatever will I do?  I’d better protect myself.  I’ll prepare for the worst.  And I’d better take something to settle my nerves.  Oh, I just don’t know what to do.  I just know it isn’t going to turn out well!

There’s the 9 of Swords for you.  It sends us scrambling to hide under the bed, even if the very big noise was just the vacuum cleaner on the other side of the house.  Especially if we just did something somebody somewhere sometime told us wasn’t a good idea. 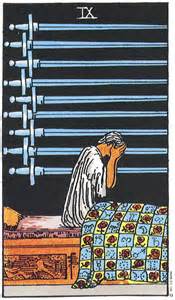 9 of Swords is often called the “nightmare” card.  You can see in the Rider-Waite-Smith illustration that someone’s being kept up at night through sorrow or worry.  Dark night of the soul, eh?

What we really need with 9 of Swords is a safe place to retreat for a rest, so we can think straight.  Hiding under the bed can be a useful short term strategy (if you’ve got fewer dust bunnies than I do!); eventually, you’ll want to find someplace a little more comfortable.

We want to use our thoughts to make sense of our experiences, rather than to spin endless replays or worst-case scenarios.  We need to accept the truth of what got us to where we are, and climb that ladder of swords to a better place.  Remember, swords indicate communication and ideas, as well as concerns.  We can talk with others about our dilemmas, and educate ourselves about possible solutions.  Being alone with our thoughts is not a bad idea, but torturing ourselves with them definitely is.  It’s time to face our fears.

Find a restful retreat to sort out the old experiences.  Let your acquired knowledge lead you to new beginnings.

We’ve got one of the “awwww” decks to look at XX Judgement: Cats Eye Tarot.

Those climbing kittens have made it up to the heights of the cathedral, and are quite comfortable there.  They’ve even got kitty gargoyle to keep watch over them.

XX Judgement calls us to our own heights.  Actually, it wakes us up to realize we’re already there or, at least, on our way.

This follows nicely on the 6 of Wands from last week, doesn’t it?  6 of Wands lets us know we’ve done the work to reach our goals.  XX Judgement tells us that everything that holds us back has been swept away.

Expect to find new meaning to your life this week.  If you’ve been on hold, you can expect to come to life again and get moving.  Think of the phoenix or of tent revivals.  If you’ve been feeling like you’ve lost your way, you’ll find that you’re actually on track to your purpose.

XX Judgement following 6 of Wands lets us know that those goals we attained are part of a bigger picture.  We realize who we are from our successes (instead of having to make a bunch of mistakes to learn!).

That promotion into the position you wanted last week lets you know what’s really important to you in your career.  The legislation you helped put through leads to even more developments in society that help even more people than you’d originally set your sights on.   Your new traveling lifestyle leads to a lecture circuit or a book idea.

Your life will never be the same after XX Judgement.  You’ve recognized your calling and your entire life is transformed.  You can climb to the top to see the big picture.  All the clutter that’s been dragging on you has been upcycled and repurposed.  You’re out of the shadows and into the light.

Welcome to your bright new world!

We’re back in Court!

Take a look at the Knight of Pentacles post for reminders of the general “rules” that will make your stay in the Court much easier.

Queens are the Water element of the Courts.  Think of all the descriptives for water: flowing, constant, nourishing, able to move around obstacles, able to wear away the densest of stones, given enough time.  Water in the tarot world is also associated with relationships, emotions, and creativity.  So Queens may ebb and flow like the tides, but they are constant and reliable.  They know who they are and have the maturity to use their gifts.

Swords, remember, are associated with Air, with communication, education, ideas, wit, the mental world.  So our Queen of Swords is going to be one smart cookie, talkative, quick witted, able to run the show and get things done with her mind.  Others around her will look to the Queen of Swords for wisdom, clarity and decisive direction.  Because she’s a Queen, concerned with Water as well as Air, she’ll use her ability to assess and analyze any situation to nurture others.  She knows how to think outside the box to serve those in her “kingdom”.

So, who in your life is that ambitious, brilliant mind that nurtures those around her?  Traditionally, Queens are mature women, but they really stand for the feminine principle, rather than for the female.  If an articulate young man with exceptional maturity and abilities to care for others came to your mind, don’t dismiss him!  He could very well be the best example of Queen of Swords energy in your life.

If the Queen of Swords is the only Court card in your spread, you may be looking at a situation which will be revolving around a person who meets her description.  Or, she may indicate an aspect of yourself that will be important in your circumstances.

Or, remember, she can also stand for the general energies of a situation.  So, if you’ve asked about a romantic relationship, there may very well be an emotional connection (Queens being all Watery), but there will be an important element of mental connections and a good chance that those in the relationship will be vying for control (those Airy Swords with the Queen’s mission to rule).

It can be fun to invite some Court cards in for tea or supper.  Since you’ve met the Knight of Pentacles and the Queen of Swords, why not have a casual get together and see what it’s like to interact with the Airy Knight of Earthy Pentacles and the Watery Queen of Airy Swords together.  See what kind of clever changes a chat with them will instigate in your life.   Between the Knight’s persistence and the Queen’s abilities to overcome obstacles, you can let your best ideas come forth.

Just keep an eye on that Queen if she shows up as a clever and chatty Siamese, especially around your best china.

Enjoy the mind-blowing possibilities this week!

I'll be back at On the Wings of Dreams for Tarot on Wings on the 10th December. Call the shop for an appointment at 304.876.0244. Walks ins are welcome if there's an opening.

5:30-6:30pm Yoga at Paynes Chapel Ridgeway Community Hall, Ridgeway, WV One more class on 1st December. We're at the corner of Rte 11 and Specks Run Road and, yes, you can drop in.